Today has been another one of those manic May Ball days!  I got up late after last nights gig and then I went in for a soundcheck that didn’t happen (mostly to help out because I’m not actually playing the gig!), got rained on (again) and since getting home I’ve been helping with logistics because one of the gigs tomorrow just got insanely complicated!

But I do know have time to catch up my days with 30 Days Wild which is very exciting!  Today’s activity is a very pleasant indoor one for me, although it does require me to at least look outside and find out what the weather is doing.  Today’s post is going to have a weather theme so I thought I’d share a few interesting facts I found out about the weather around the UK (at least true at the time my AA Book of the British Countryside was published!):

Colin doesn’t have an adventure to share with you today as my partner did playtime with him last night as I went to bed early hoping to catch a couple of hours sleep before the gig!  He’ll have one soon I promise!

My adventure for today didn’t actually start today.  But I decided that I wanted to start it and share it with you about half way through June.  Just before June started I decided that I was going to make and keep a weather diary.  I’m hoping that I will be able to keep this going for many years to come so I’ve made it nice and thick.

A quick tutorial on how to make yourself a weather diary notebook then I’ll explain how I’m keeping my notes.

This is the easy option for those with minimal time!

Method 2 – Buy a notebook with enough pages, label a side of each page with the date and use a line or two for each year.

Another easy option, there are plenty of lovely notebooks out there – labelling takes lots of time though!

This is the method I chose!  I started off with some plain A4 paper and I cut enough in half (to make A5 size sheets) so that I had one side for every day of the year – including leap years – and a few spare pages for the start.  I started off with 93 sheets of A4, but you could use 186 sheets of A5 paper!  I hole-punched each A5 sheet and then went through a wrote the dates on each side.

For the cover, I cut some appropriately sized rectangles from an old cardboard box and used a pencil to poke holes in to match the holes in the paper.  At this point you can decorate your cover.  You could use pretty paper, draw over it, stick things on, or anything you fancy!  Personally, I used my hot glue gun to make a pretty front page on the brown cardboard.

I then got some string and bound it all together.

My Weather Diary – modelled on my bright and colourful ironing board!

Now to use the diary!  The first page I decided was my title page, I might decorate it more another day:

Then I made a list of the symbols I was likely to use and made a key to go in the front.  I also made some notes so I could be consistent with my recordings.

Then I started watching the weather and making recordings (here’s an example couple of pages from when I started it!): 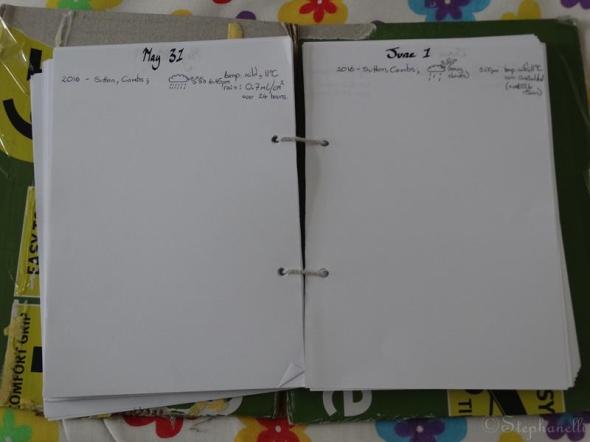 Since I started recorded we’ve had a couple of windy days, a run of hot sunny days and a few days which have been overcast and a few days of rain or showers and one day with some mist in the morning!

I also headed outside and took a picture of the skyline from the bottom of my garden.  I love the fenland because of the big skies!  Today’s wasn’t the most interesting, but some days have had some beautiful colours particularly around sunset!  (You can also see the large amount of brambles and cleaver that’s trying to get into the garden…I’m hoping there’ll be blackberries I can reach as well though!) 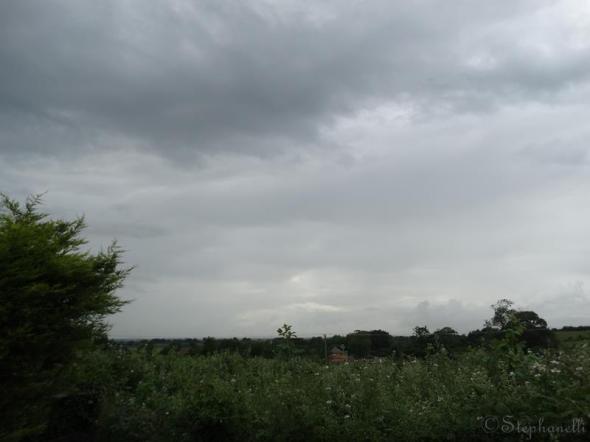 I’ve always been reasonably interested in the weather and how it works and I think its amazing how such a simple thing can be so variable, even in our little country!