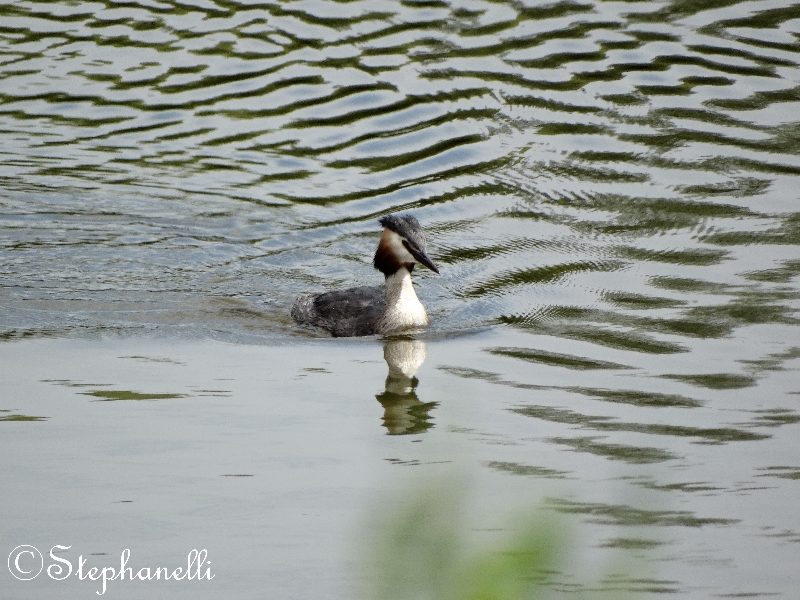 This is the first post in a series of posts about different species of flora and fauna.  I plan to collect a series of photos about the subject and find out some more about it – such as its scientific name, its size, where it lives or can be found and other interesting facts.  These will hopefully be posted on a weekly basis!  Today’s subject is Great Crested Grebes.

Approximate Size: The largest grebe, around 49cm in size

Plumage: These grebes have different plumage in summer and winter.  In summer they have the characteristic brown body with a black tuft on their head and red-orange and black crests on their heads below the tuft.  In winter they lose their crests and become whiter and generally paler.  Juveniles have a black and white striped head.

Habitat: Great crested grebes breed on freshwater lakes, reservoirs and gravel pits.  They will tend to nest on floating vegetation.

Habits: These birds are divers and so they dive for fish to eat.  They rarely walk on land because their feet are positioned so far back on their bodies.  Great crested grebes have an elaborate courtship display and will mate for life.  They will lower and shake their heads, copying each other.  They also have a weed dance.  I have never seen this in real life, but one of my favourite clips of their breeding routines can be found here.  Juvenile grebes will often ride on their parents’ backs when they are little.  I’ve noticed that they regularly add materials to their nest and keep it tidy.  Whenever the two adults meet each other, they will lower and shake their heads – a bit like in the courtship dance – its very sweet to watch!

Personal Experiences: There has been a pair of great crested grebes breeding on the Somersham Lake for the couple years I have been visiting regularly.  They always come back and nest in the same spot (see the photos below) and generally have two or three chicks each year.  This year they’ve had two chicks.  I love watching the grebes because they are so beautiful in the summer and their chicks look so sweet!  This year has been a wonderful experience for me as they have become brave enough to come that little bit closer to humans.  They are still shy and won’t let you get too close though!  Fortunately, I’ve been lucky enough to have a new camera with an increased zoom this year so I’ve been much more successful in getting some decent photos! 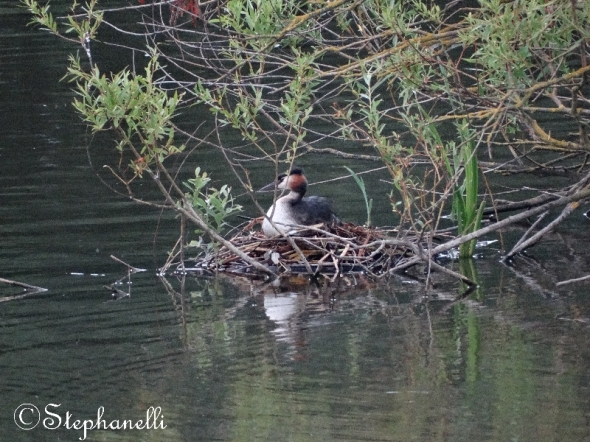 The nest is in the far left of the tree! 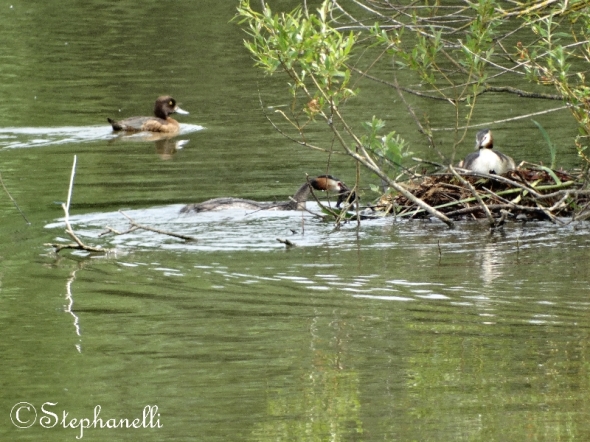 Like Loading...
08 Jul This entry was published on July 8, 2015 at 1:32 pm. It’s filed under Species Spotlight and tagged animals, diver, fauna, great crested grebe, podiceps cristatus. Bookmark the permalink. Follow any comments here with the RSS feed for this post.